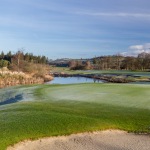 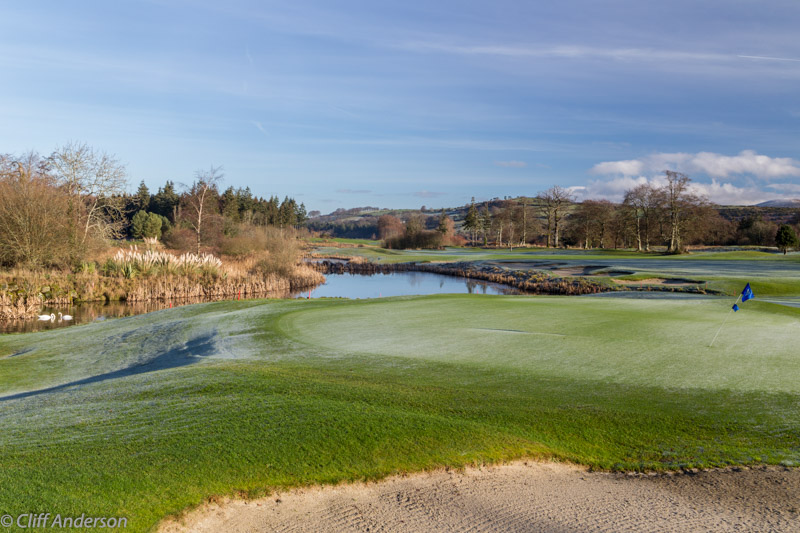 We’ve had frost, snow, winds and rain but it hasn’t been a bad winter so far.

Birds have had a mixed time. There has been a good deal of wild fruit on trees and on the ground and people these days put out more food in gardens.

On the other hand, some of those aweful shrubs with ‘lasting’ berries (meaning that birds don’t like them, which makes them close to useless in my book) have begun to see some bird harvesting. 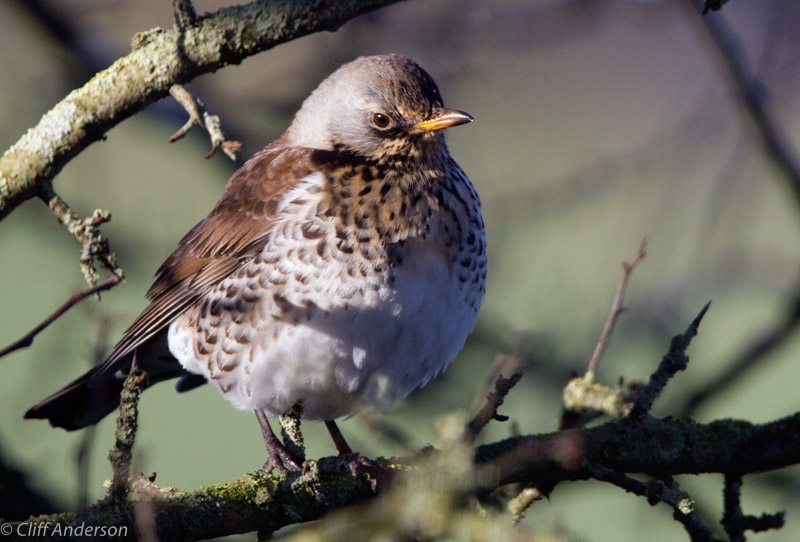 Whooper Swans and Greylag Geese still visit the fields beside our garden.

In the garden, Fieldfare and Redwing arrived in December.

These thrushes are in the same family as the more familiar Song Thrush, Mistle Thrush and Blackbird but arrive in some numbers here only in winter from Scandinavia.

They are definite signs of cold weather if that’s not already obvious. 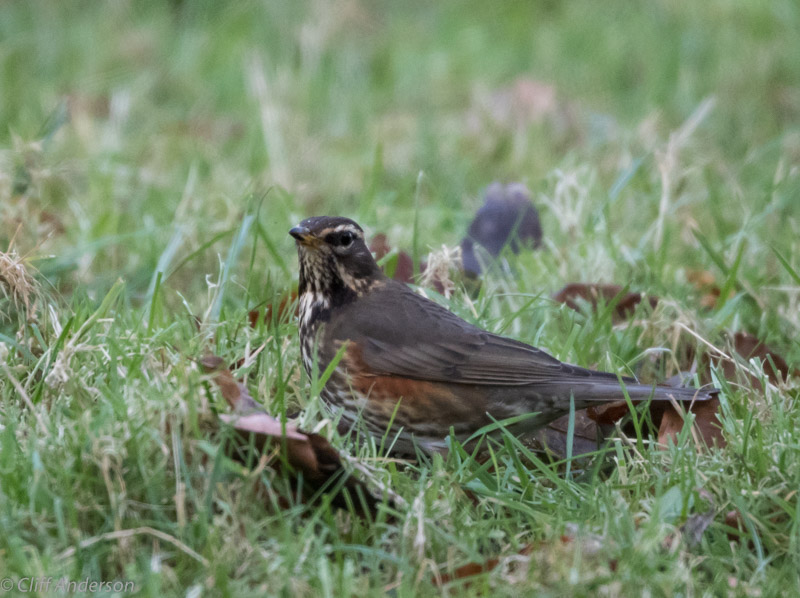 The Fieldfare is pretty much Mistle thrush size and has a grey look.

The Redwing is closer to Song Thrush size and appearance but has a red patch under its wings.

Both can be a bit shy and scare off easily. 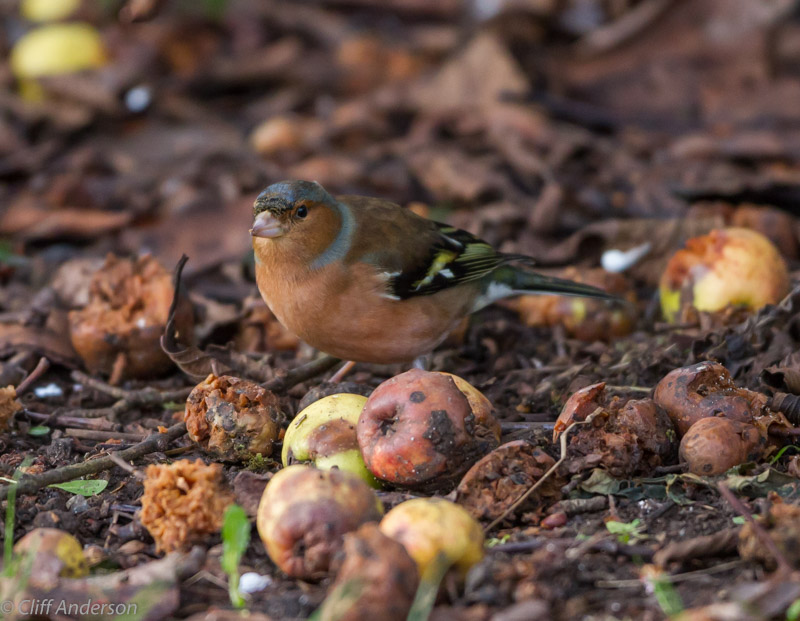 The Fieldfares love the fallen Crab Apples in our front garden.  Strangely we usually get a bumper crop of these every second year and were not expecting them again this year.  They still came and fell in large numbers which attracted the Fieldfares as well as the more common and less shy Chaffinches and Blackbirds. 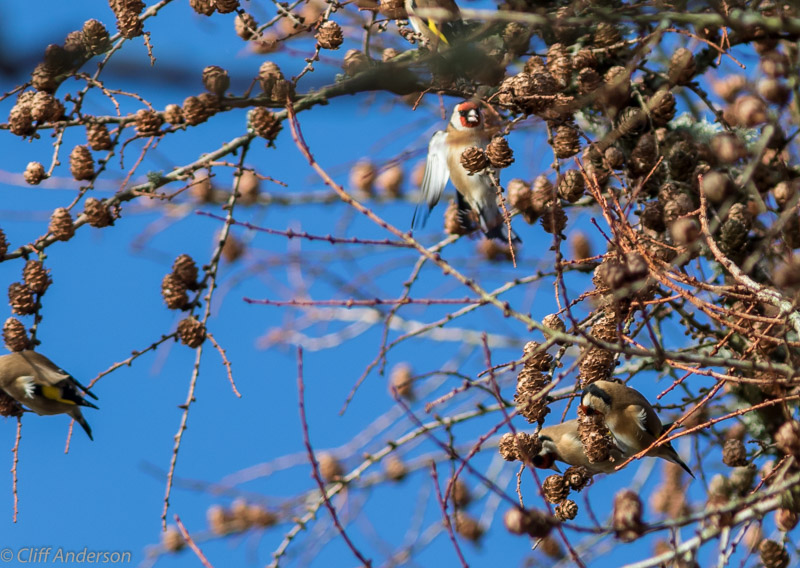 Down at the lakes I heard and then saw a large flock of Goldfinches (Charm, Drum or Troubling of Goldfinches according to ‘Birds of Ireland, Facts, Folklore & History). There must have been at least 50 birds making quite a racket as they attacked the cones high in the Larch trees beside the lake. They moved quite fast, making them difficult to photograph and showed good agility. 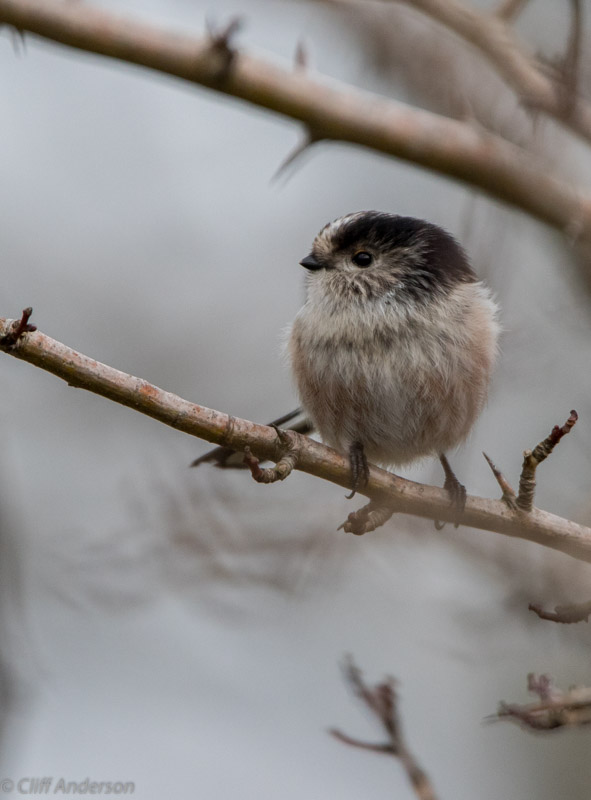 Also close to the lake, a flock of Long-tailed Tits flitted amongst the trees

They also move quite fast and don’t stay in one tree too long.

It is an unfortunate fact that Ireland has a much smaller number of bird spesies than the UK – who in turn have a much smaller selection than the continent.  We miss out on some really cute members of the Paridae family, such as Crested, Marsh and Bearded Tits.

However the Long-tailed is one of the most beautiful birds in Ireland with its long tail and pinkish feathers.

Its nest if you ever find one (not easy), is beautifully constructed in a tree from moss and spider webs, with a small entry hole – something to keep an eye out for in spring. 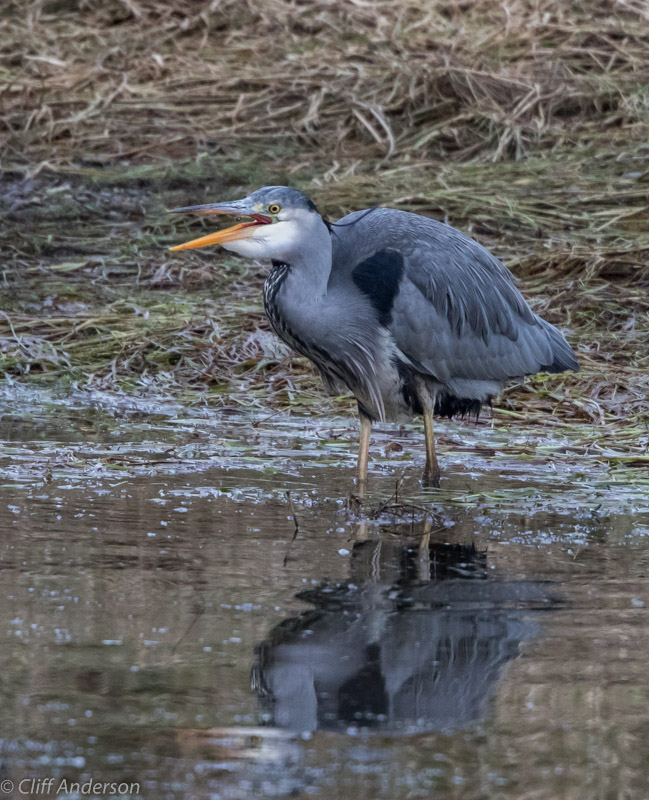 Finally, checking out the lake near Russborough House, this Heron was happily fishing away. He (or she) didn’t seem to be catching anything large but seemed to have plenty of small successes. The prey looked like insects.

Hopefully the rest of the winter will be as enjoyable. 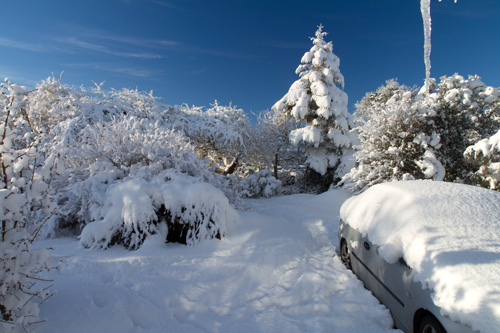 If the weather isn’t the warmest now, last December was making records for long and deep cold spells.  Heavy snow and ice continued from November causing havoc in a country not used to or prepared for, such conditions.

Many found themselves without the use of their cars – either abandoned on the road or stuck like ours in the driveway.  Even after digging out the car, negotiating the local road was tricky and it was thereafter left each evening  at the front of the driveway where the snow was kept to a reasonable level.  Actually the snow was only the top layer.  Most of the surface was very hard ice. 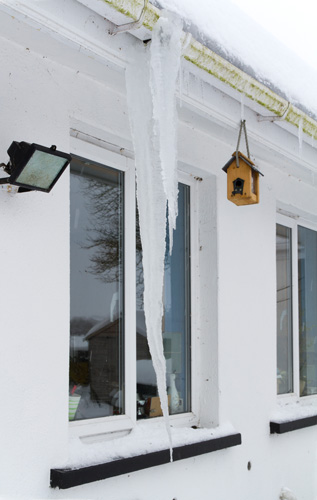 Small drips from gutters had turned into icicles while any heavier drips made for formidable weapons.  One of ours was named ‘Excaliber’. 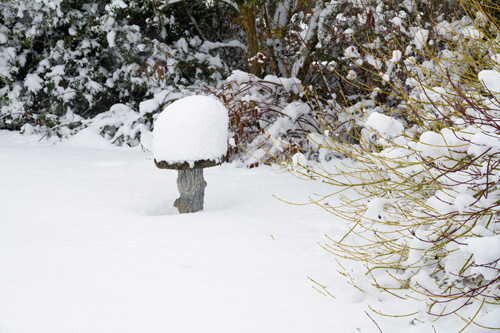 Obviously conditions were very rough for wildlife and particularly birds.  Nuts in bird feeders were icy, bird baths were stacked up with snow and wild food was rare.

In Dublin, Stepen’s Green pond was completely frozen with birds skating, unwittingly on the surface. 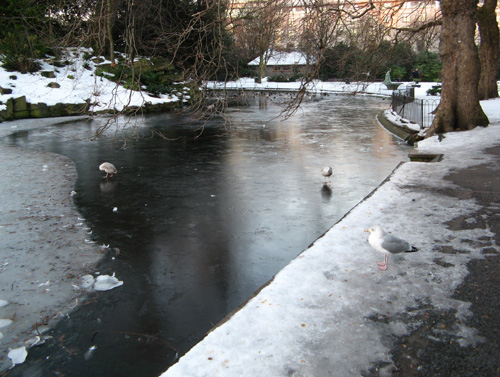 The Phoenix Park looked fabulous on a walk from Islandbridge via the Park to Chapelizod and back by the Liffey.

We were first rewarded for being out in the freezing cold by the sight of a pair of Otters playing about in the Liffey.

Following that, deer were ambling across the road in the Park. 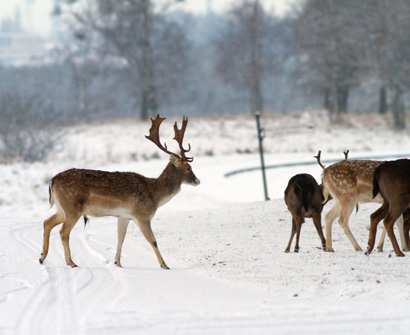 We were a little surprised to see as much wildlife as we did but they were probably as surprised by the weather as we were. 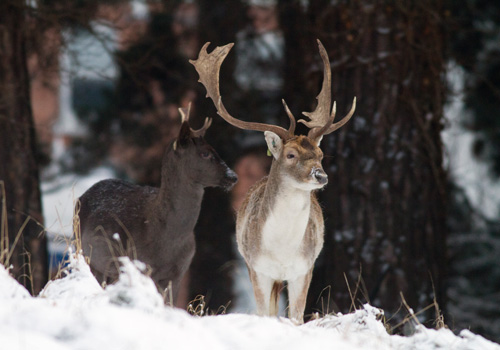 The liffey was partly frozen and birds did their best to survive. 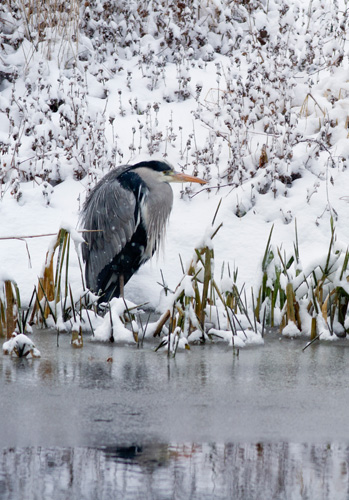 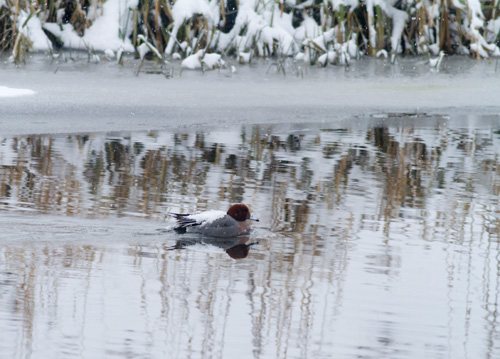 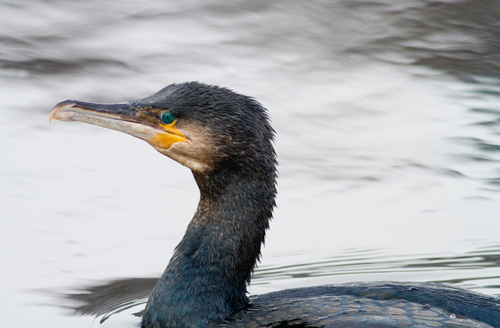 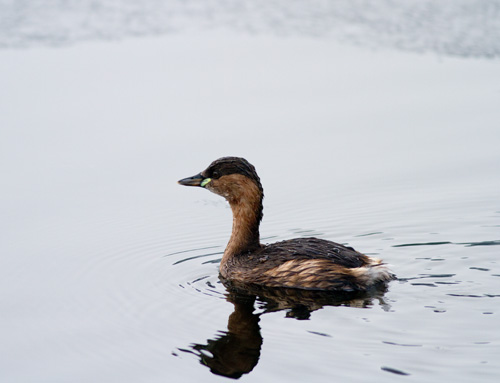 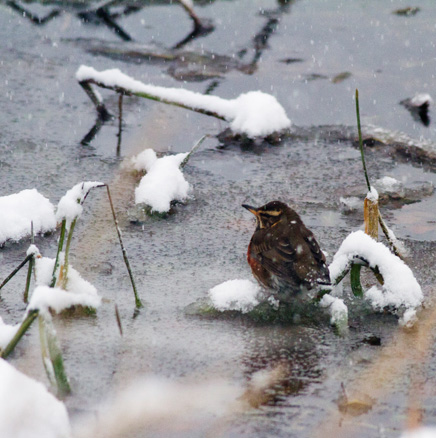 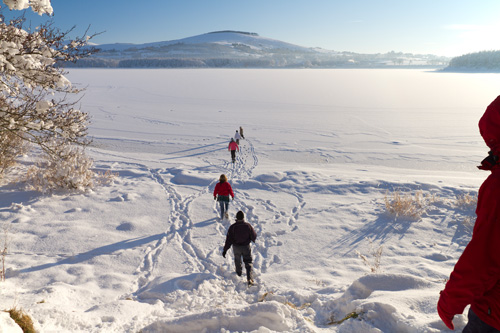 Skulking in the reeds, we also got some fleeting views of a Water Rail.

Blessington lakes looked stunning over Christmas.  Risking a very cold wetting, we walked out over the lake for quite a distance before sense took over.

Trees were heavy with snow and blue skies brought out the brilliant white of the snow. 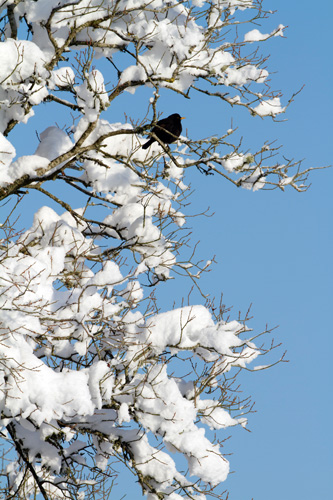 Overhead, Whooper Swans flew out over the lake looking for the water. 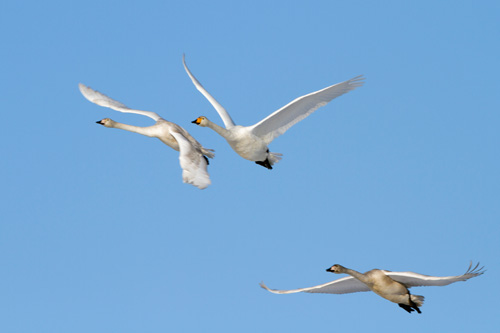 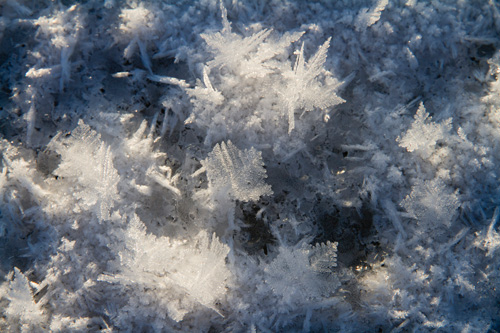 The cold spell was harsh and pretty inconvenient but it was seriously beautiful.